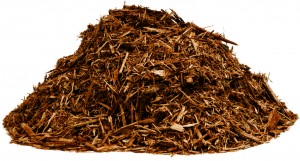 Mulching your plants is an important step in maintaining a healthy growing environment. Mulch helps conserve moisture in the ground during the hot summer months by reducing surface evaporation and cooling the ground. Later it warms the ground during the cold periods, protecting plants by regulating temperatures and preventing temperature extremes. Mulch discourages weeds by keeping light from reaching them, eliminating their harmful competition with trees and shrubs. This doesn't mean a passing bird or animal or the wind will not blow a weed seed onto the mulch, but it is infinitely easier to pull the offender out of loose mulch than soil.

There are many types of mulches available in the marketplace. Organic mulches, such as manure, bark and compost break down over time, adding valuable nutrients to the soil. Bark mulches come as chips, nuggets or shredded and usually in softwood. The chips or nuggets are generally more ornamental, while the shredded bark, although attractive in appearance too, is better in retaining moisture because of the large surface capacity of the material. Other mulches, such as gravel and stone are used to keep leaves off of moist ground and to provide sharp drainage to an area. Some stone mulches like marble chips and rounded river stones add an ornamental touch to the landscape. Woven weed cloth is used to control weeds, and is sometimes used under organic mulches or stone. Plastic mulch and even newspapers and foam products are used in the winter protection of trees and shrubs and to suppress weeds in nursery beds.

Even though mulching appears to be a no-brainer, there are some do's and don'ts to follow: More is not better when it comes to mulch. Too much mulch can be harmful to plants by retarding growth and even smothering them. Two to three inches of bark mulch is plenty, but it must be replenished every other year as it organically breaks down. A heavier mulch applied in the fall after the ground freezes to protect plants from heaving should be removed first thing in the spring after it thaws. Finally, if manure or compost are used for mulch, only well-rotted materials should be used because fresh materials generate harmful high temperatures during decomposition and rob valuable nitrogen from soil and plants to accomplish that.

Want to know how much mulch to buy? Here is a great mulch calculator we found!